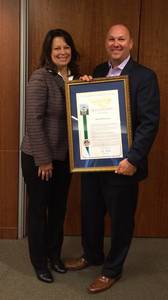 This week, San Diego had the honor of hosting 35 leaders from the state’s eight local BOMA associations for a quarterly meeting of the BOMA California (CAL) Board of Directors.

Case in point was BOMA San Diego’s successful campaign last year to overturn the massive linkage fee increase. BOMA’s ability to partner with the Chamber of Commerce to build the San Diego Jobs Coalition – a group that grew to more than 50 businesses and organizations – was the single biggest key to victory. It’s a model that is now being looked at, and replicated, by other associations across the state and country facing similar pressures.

Title 24 Energy Code
The financial impacts of the State’s new Title 24 Energy Code regulations was the focus of a lengthy afternoon discussion. BOMA members are experiencing severe impacts from the new mandates, including massive increases to the cost of tenant improvements and delayed building inspections from government officials. If any BOMA San Diego members are experiencing similar problems, please report those to the Government Affairs Committee via Craig Benedetto at craigb@calstrat.com.

A Look Ahead – Potential New State Laws
Every year, more than 2,000 new laws are introduced by the Legislature, and 400 – 500 of those bills directly impact the commercial real estate industry. Those same numbers are expected this year. While bill introduction won’t officially happen until later this month, it’s expected that bills related to taxation, water, energy and land use will once again be at the center of the discussion. Once priority bills are identified by BOMA CAL staff, the BOMA San Diego Government Affairs Committee will educate our membership and ask for your active participation to support and oppose key pieces of legislation.