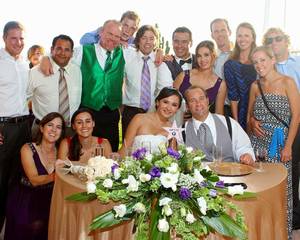 October 27, 2004 - Sitting in my first client's office, trying to think of a name. Stumped. Thinking out loud. My first client, Brad Schlachter, is the Owner of Dassons Development, developer of the Preserve at Del Mar. The Preserve is a luxury, gated, custom home community on Del Mar Mesa. Brad has also started more businesses than most entrepreneurs I know. "You need to put your name on it" states Brad. OK, but just Watkins Construction? There already is one of those and they do hazardous materials abatement. Needs another word. A contractor friend of mine put "Pacific" after his name for his company, but so does about one or two subcontractors in every trade. Needs to be more original. What project teams have I been on? Petco Park.  Indian Wells Tennis Garden.  Disney's California Adventure.  Pacific Athletic Club.  LANDMARK!

That is the very condensed version of how our name came about. With a name and one project we were off. Off to where, I had no idea. I would like to tell you I had a 10 year master plan with a complex and intricate Proforma, but that was not the case. Things didn't really start to materialize until we got our second project at the San Diego Jewish Academy. The project was "A Ball Field for Kids". The scope was new athletic fields for the students of the SDJA. This project let me hire my first employees. One of them, Dean Schumacher, is still with us today.

The San Diego Jewish Academy really launched us as a legitimate general contractor. We rented our first office space, hired another employee and started planning for the future. Around this time, we started establishing the values and a philosophy that would be the foundation of Watkins Landmark Construction.  The following two paragraphs have appeared in every Statement of Qualifications released by our company. They are in essence, our values and our philosophy.

It was our goal to build a construction company that specializes in cutting edge projects that left a lasting impression on the client, users and surrounding community.  Hence the term "Landmark" in our name.

We have added a strong team of builders to our staff who have the ability and desire to work on complex and intricate projects. We believe that our employees are the building blocks of our company, and the company is only as good as the people we hire. This belief has been proven correct by the growth and success of Watkins Landmark Construction over the past 10 years.

More simply put, people want more than a paycheck in their career. They want the chance to do something great. In our case, build something great. Something that will last. Something they can point to 10, 20  plus years from now and say "I helped build that project." Whether that project be a office building, stadium, theater or church. They want to build a landmark.

I have been in this industry since I was a laborer, or "shovel technician" as liked to call it, for Sundt Construction in Phoenix during summers off from college in the 80's. I have seen the best and the worst of times in the construction industry. I have been on some incredible landmark projects and seen the depths of the worst recession in my lifetime. I guess to summarize what working at Watkins Landmark has meant to me, I would say the same thing I have told my kids for years. "There is a lot easier ways to make a living but Dad loves his job. Most people do not like their job so Dad is very lucky."

Watkins Landmark Construction was founded by Jody James Watkins in 2004. Jody founded the company with the purpose to build landmark projects. With every project we build, we want to satisfy our client not only on a quality, economic and functional level, but a personal level as well. Furthermore, we strive to build projects that will stand out to the surrounding community as well as our clients. Hence the term "Landmark" in our name.