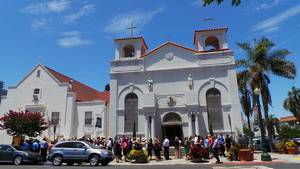 On July 8th, BOMA members met at Amici Park for their monthly meeting. With boxed lunches, a pleasant summer day, and beautiful ambience, it was a unique luncheon. Probably the best. Ever.

The Little Italy Association (LIA) is the only district management corporation of its kind in any Little Italy neighborhood in the United States. LIA deals with a variety of livability issues that range from sidewalk cleanliness to new building design review; from community schools to no-leash dog run parks. The Association pledges to advocate on behalf of its members’ best interests in the areas of public safety, beautification, promotion and economic development while preserving the unique cultural resources that exist in the community.

Little Italy is arguably the pride of San Diego
Little Italys throughout the United States have symbolized the tremendous contributions Italians have made to this country. Unfortunately, many of these historically established business districts are disappearing before our eyes. These Little Italys are either declining due to growth of other adjacent ethnic neighborhoods or are a shadow of their former glory due to the dispersion of Italian families from these districts.

With the decline of the tuna industry on the West Coast and the destruction of 35% of Little Italy due to the construction of Interstate-5 freeway; Little Italy suffered nearly thirty years of decline. In the early 1990′s, established property owners and family-run business owners decided to take their fate into their own hands and established an Association to help maintain the heritage and charm of this unique neighborhood of San Diego.

Of the many impressive renovation and new construction projects in Little Italy, we had the opportunity to end our walking tour at the Piazaa Basilone. After ten years of being a bustling and active public space, the Little Italy Association revitalized the Piazza Basilone. The Piazza Basilone was dedicated in November 2003 to honor the highest decorated Italian-American war hero, Gunnery Sergeant John Basilone, and “the boys of Little Italy that never came home.”  This Piazza was the concept of longtime Little Italy resident, Tommy Avila, and his vision that there would be a permanent space, in the neighborhood, to honor the men and women that have served and continue to serve our Country.

Find out more about Little Italy at and part of San Diego’s proud heritage at LittleItalysd.com.